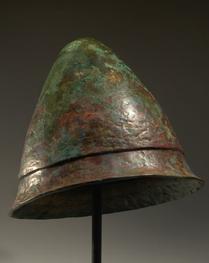 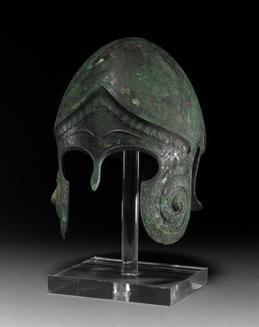 ​There are only two pieces of pottery supporting the 'hammering' theory and absolutely no literature from the period that does. The pottery however is somewhat dubious. They separately depict two smiths holding smaller chasing or planishing type hammers and in their other hand they are holding a completed helmet, which is decorated or engraved. The hammer type both men are holding would be recognizable to any tin, copper, silver or bronze smith today. They are not forming hammers per se, but rather they are smaller hammers used by smiths to fine tune the shape of edges of metal pieces. Used for the delicate work of turning edges and smoothing work pieces rather than forming these complex shapes.

​Therefore, it is likely that these helmets were made using a variety of techniques to achieve their heavily sculpted curvatures and delicate features. Casting technology in common use during the Classical Period in Greece and elsewhere proves to be at a level capable to produce these helmets via the casting method. If even partially casted and finished by other techniques, this would be a more feasible theory and explanation than the out of date, simple, and unsubstantiated theory of hammering as the sole method. Physically, the hammering theory does not hold up when comparing the facts of physics, physical properties, and limitations of both the bronze and the limitations of hammer smithing.

The hammer method is more accurate and likely when applied to the other helmet types. Devoid of the complex curves and geometries of the Corinthian type the other helmets would have been easier to hammer into shape and would have been markedly cheaper as a result. It is more and more obvious that early archeologists unearthing proto-Corinthians and early stage helmets, as well as the simpler helmet types, would have viewed the hammering method as logical and, by sweeping statements and in their writings and study of these artifacts, would have made blanket assumptions about their construction—which is still an unquestioned gospel today.

Closer inspection of these more highly developed and much admired later Corinthians show us that at some point there was a departure from simple manufacturing techniques to something approaching high art. No longer content with simple rounded helmets with very broad and sloping curves, the Greeks did something very revolutionary, they started to make helmets that resembled all their other disciplines. Highly angular and complex, with hints of geometric and trigonometric symmetries that far surpass what the human hand alone can render. They achieved something no one has done since…they created the most haunting and evocative helmets that have ever been made. Even long empty and mute in their display cases, they appear to look back at you across the centuries and you can almost hear the cry of battle from their now silent faces. 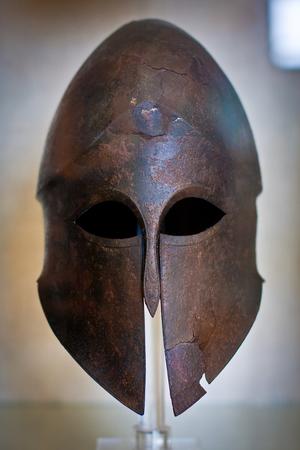 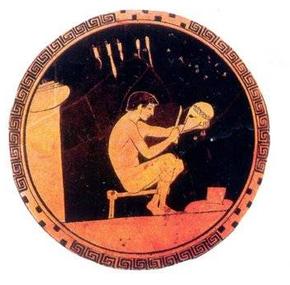 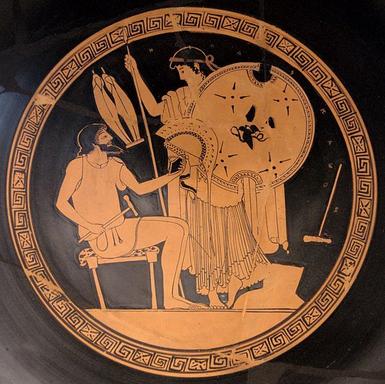 ​Some of these helmets appear quite frequently among the artifacts, but that does not reflect their popularity nor their value to the Hoplite. The Illyrian and Pylos helmets appear frequently as artifacts, but this is largely due to their cheap cost. Poorer Hoplites and young men just starting their military service years would likely have bought these cheaper helmets as they probably were considerably less expensive and would allow the Hoplite to better afford a quality shield and spear—his main weapon and defense. These two helmet types are actually quite poor at providing good coverage and protection and were thus likely to only appear in the rear ranks of the Phalanx. A fully exposed face and neck in the front lines would have only assured your speedy injury or death.

​Perhaps no single piece of the Hoplite's arms and armor is quite as iconic as his helmet. Indeed, these evocative and enigmatic helmets sit in museums all over the world, staring back at us with almond shaped eyes. Bearing silent witness to the passing of centuries, their impassionate expressions are ever stoic. These helmets are so closely associated with ancient Greece that they can be readily identified by nearly anyone in the world as belonging to the Greeks.
This is likely to be a fairly long and informative article as the subject matter is quite extensive. In order to narrow the scope of this subject, I am electing to primarily discuss the Corinthian style helmet. While numerous others appear in the period, I will not diverge into them other than to give their basics. They were neither as prolific nor as idealized as was the Corinthian helmet. 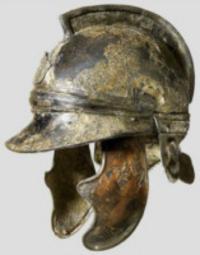 ​The usual and most commonly found helmet types in the archeological record of the Classical Period are:

​It was an easy supposition to make when unearthing these helmets that they were formed by hammer from a single flat sheet of bronze. While this theory fits with the earliest examples and is backed up by only two often misinterpreted pieces of pottery, it is likely not the whole truth. While the technology and method of crafting the earlier helmet types can be easily the work of a hammer and a sheet of bronze, this manufacturing technique would be inadequate to produce the later gracile types. 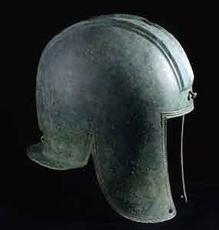 ​The Thracian type is readily identified by its baseball cap like visor and seems to have been very popular in Attica, particularly amongst the Athenians during the Classical Period.

The Phrygian type is adopted from the Scythian cap styles of the northern frontiers. It has an almost 'smurf hat' look to it with a lobate form curling over toward the front of the helmet. It mainly came into widespread use during the Peloponnesian war and into the Hellenistic Period.

The Chalcidian type originated in the north of Greece and seems to have been the most changeable of the types, with really no two examples looking alike. Its main features are a lack of a nasal piece and hinged, moveable cheek plates.  Sometimes they were fitted with plume holders and very exaggerated crest holders. Again, this is a slightly later type.

The Beoetian type is a very dashing and different helmet that appeared in the Classical Period. Modeled after a Pestastos, or Greek sun hat, it has drooping folded contours all around the perimeter of the helmet bowl. It is primarily a Thessalian/Macedonian type and is strictly a cavalryman's helmet. It provides for the good peripheral vision a horseman needs.

Lastly, the Corinthian type—the one so closely associated with the Hoplite and popular with the ancient Greeks that very rarely is any other helmet depicted on pottery or sculpture. It is possible today to very easily track the evolution of this helmet throughout several centuries via the artifact helmets that survive. In the middle to late 19th century, European archeologists plundered much of Greece of these helmets were sequestered whenever and wherever they could find them. They range from quite crude, primitive types which appear to be little more than bullet shaped forms with crudely cut eyes and nasal pieces to the zenith of their form—helmets like the 'Denda'.

The Greeks display amazing skills and ingenuity in the fields of modeling and casting. In fact, nothing about the art of metal casting is different today than the techniques and processes they developed and passed on to us. A number of more recent discoveries actually demonstrate that some helmet types were in fact hot press stamped using large carved and shaped stone tools and dies.

It is likely that in order to form the later Corinthian helmet types it was necessary to use a number of processes. It is far more likely the helmets were cast or partially cast and then finished more finely with small precise hammering and forming. In fact, no smith or engineer who has been asked about the possibility of single sheet forming has agreed that it was even possible. The parabolic curvatures, expansion and shrinkage, and various angles are impossible to achieve with a single sheet—no matter what the skill level of the smith. The physical properties of the alloy prevent these complex geometries. Additionally, the variance in thicknesses of the helmet walls are equally unattainable with the regularity seen in the artifact by hammering processes.

The main argument against casting of Corinthian helmets by the ancient Greeks is the usual weight of the reproductions today. Most are done within the safe zone of casting thickness of about 1/4" and the resulting weight is roughly 12-15 lbs. Not really intended to be wearable reproductions. However, Greeks could and did routinely cast in the minimum thickness allowed by physics, about 1/8" thick. Another argument surfaces in a pan-museum study done about a decade ago in which a large percentage of intact helmets were weighed. The results gave the weight range for Corinthian helmets of 3-5 lbs. However.....most historians would say this is a good weight without stopping to consider one very important fact about these results.....

These are 2,000-3,000 year old helmets, upon which centuries of oxidation and patination have slowly robbed them of their solidity and density. Though most of these helmets appear quite solid to the naked eye, anyone lucky enough to actually handle and study one will readily tell you; they are fragile. Not one of them is free from cracks and brittleness. Most have epoxy bandages and support shells fused onto their inside surfaces to prevent them from shattering. They are really only a shadow of their former weights and strengths. A 3-5 lbs bronze helmet is impossible given the specific gravity of the alloy, roughly 80 times denser than water. A Corinthian helmet cast, with variant thickness, and following the measurements of an artifact helmet made of new bronze; in other words a 'Live' helmet, would weigh approximately 6-10 lbs. That weight is well within accepted military standards for helmets and is quite wearable and useable. This is no greater than the weight of the average medieval helmet of comparable protection and very near the weight of today’s modern Kevlar helmets.

​Additional evidence that these helmets were not formed this way is actually provided by these same pottery depictions! No helmet or shape of this nature can physically be formed from a sheet without heating the bronze to red-orange. Cold working bronze in this extreme shape is not physically possible. The fact they are holding helmet and hammer would indicate the end stages of work and decoration after the shape was already completed. Modern smiths who build and form Corinthian replica helmets cannot even achieve this shape via hammering. All these reproduction are actually made from several sections which have been brazed together.

19th century Archeologists, and all that have followed them, espouse the same unprovable and wrong assumption about these helmets in spite of ample evidence indicating other processes. The artifact helmets show no hammer marks, and no seams or welds. They also display variable thickness around the nose and eye sockets and everywhere else they are amazingly uniform in thickness. Characteristics that are nearly impossible to do with hammering only. There is likely another explanation which many, who have only read the original hypothesis, will disagree with without considering the logic… 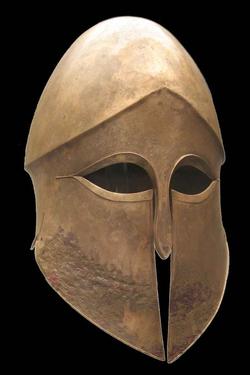 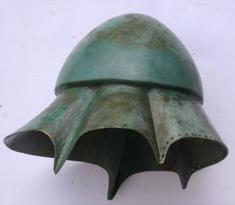 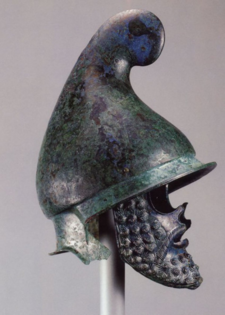 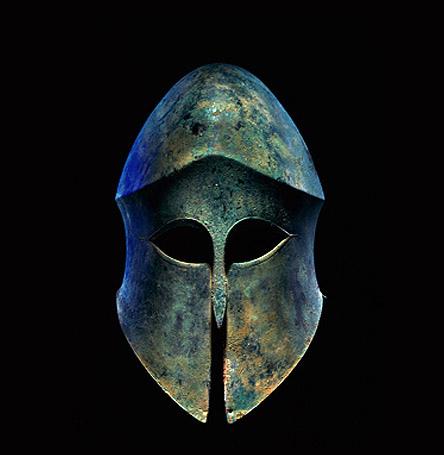