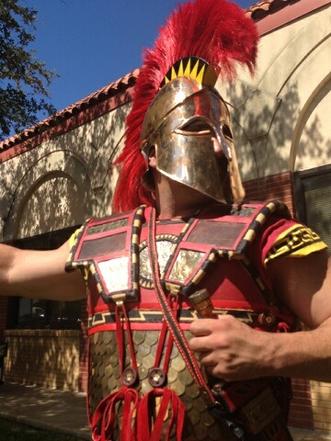 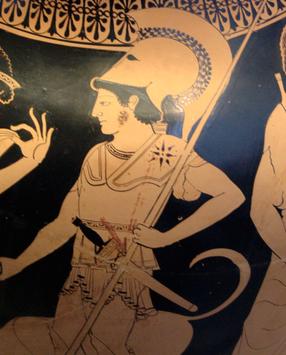 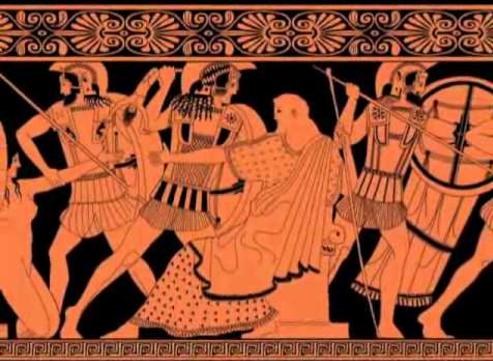 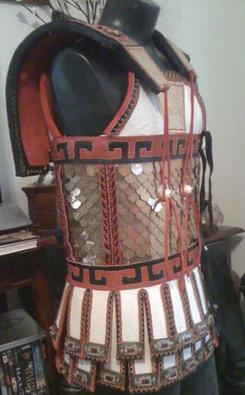 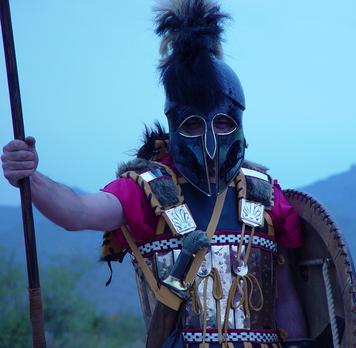 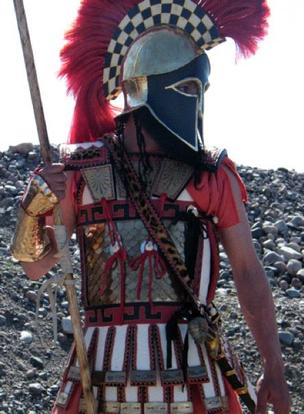 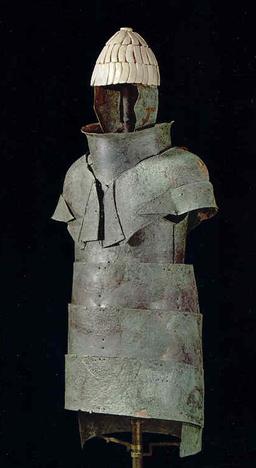 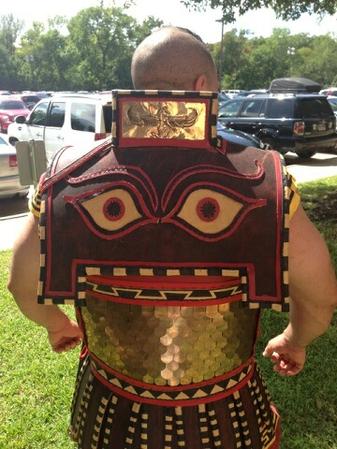 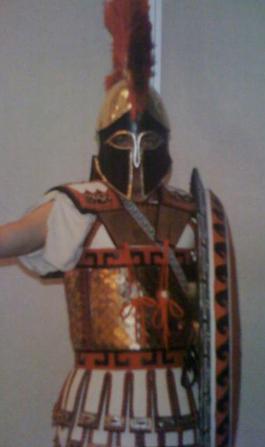 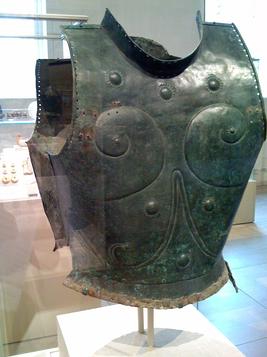 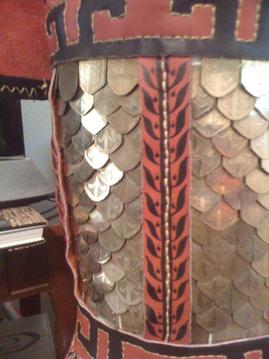 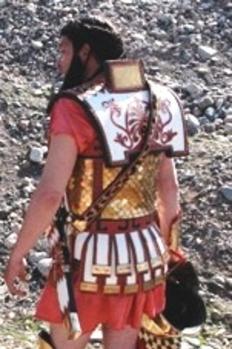 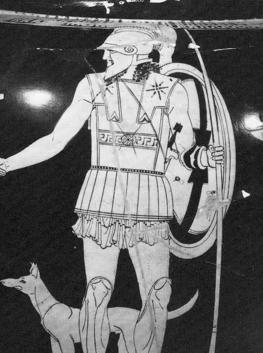 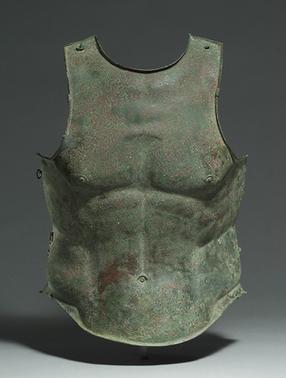 As long as there has been conflict and warfare, there has been the need for arms and armor. In the world of the ancient Greeks, this was no different. Archeological evidence has uncovered many types and styles of armor from every period of the ancient Greek world. While we can briefly discuss these types as they appeared, it is essential to the purpose of this website to devote most of this article to the armor that was specific to the middle of the 5th century.

armor found in any of the cultures growing around the Mediterranean Sea. Starting

or dense fabrics like flax linen onto which other materials were added. Perhaps one

of the earliest, fully developed and distinct Greek panoplies that has been discovered

is the 'Dendra' armor.

that interlocked down the wearer's torso and covered the hips and thighs. It was

not very graceful and would not have allowed for speed or agility. It dates to

style—one on one dueling and chariot based warfare. The idea was for a heavily

armored warrior to ride onto the battlefield in a chariot and dismount. He would

each other. The combat would then progress to spears and eventually to long and

heavy cast bronze swords or axes. The Dendra panoply evolved for use in this

rather slow and ritualized combat style. It is unknown how common this type of

armor was in its day, but the artifact shows good bronze smithing techniques and

a well evolved style so it was likely common enough.

As combat started to take on a less ritualized ideal, greater numbers of infantrymen

took to the field. Though still not Phalanx warfare, a need for greater movement was

required as combat ceased using chariots to a large degree.

together around the wearer, the 'Cuirass'. The Cuirass started out quite bell shaped and

only vaguely mimicked the human form. Numerous examples have been found of this

type that show chased or incised designs. This evolution continued, and in true Greek

fashion, turned into something of an art form. The bell or Argos style Cuirass evolved into

the muscle Cuirass. As the name would imply, this variation showed the Greeks accurately

mimicking the human form and musculature of the human torso in bronze. This seems to

be a very popular style amongst reenactors, mostly due to the large number of poorly

made but inexpensive 'muscle' Cuirasses produced. These reproductions of today are

usually far more exaggerated in musculature than the original Greek artifacts. The muscle

Cuirasses that have been unearthed show a common aesthetic at work—less is more. The

basis, perhaps out of a love of the 'age of heroes' period it came from, or simply to

display one's wealth and status, it soon faded from popularity as a new, terrifying style

of warfare burst onto the scene. The Cuirass appears to have been abandoned in a flash

as a more effective armor gained popularity within the new phalanx style of warfare.

As the city-states of Greece grew and evolved into their distinct areas, cultures, and

mentalities, the fields of battle were visited annually to decide the petty grievances and

land disputes that burst forth every spring like flowers. This crucible of war forged

the most famous of history's soldiers, the citizen-soldier, the Hoplite.

Beginning in approximately 700 BC, the frequency of conflict between the various city-states

drove the evolution of warfare style, and of arms and armor. Instead of individual champions

dueling like Hector and Achilles, now massed ranks of infantrymen pressed forward into each

other, trying to break the line of their opponents. This massed ranks of men carrying spears

and standing shoulder to shoulder behind the great shields was called a Phalanx. Phalanx

means 'fingers' in ancient Greek and this formation, with their lethal spears outstretched

before it, appears as a great monstrous hand stretching out toward its foes.

This unique style of warfare brought about a great leap in armor—the development of the Spolas. While many archeologists, historians, and scholars have misidentified this armor as a Linothorax, which existed some 400 years previously, the Spolas was made of leather. It is the armor that predominates all Greek pottery and sculpture of the classical age. Nearly no Hoplite depicted between 600-400 BC is wearing any other type of armor. Usually it is portrayed consisting of four body panels that wrap around the torso and surmounted by a wide yoke that covers the upper back, neck and shoulders. It is easily identified by the pteruges, or  'feathers,' in ancient Greek. These short slats of leather were arranged around the bottom line of the armor and descended to cover the hips, usually in two overlapping rows. This popular and effective armor was worn by nearly every combatant in the wars of the Greeks between themselves, the Persians, and even was the armor used by Alexander the Great and the armies fighting in the Hellenistic period that conquered all of Asia.

Numerous artifacts of this armor have been recently unearthed, but it is likely to be many years before images and a definitive study is made of these quite delicate artifacts. The Spolas appears so frequently in the Classical Period, that of the thousands upon thousands of images left to us, it has been possible to define a construction method and the techniques used to create it. The Spolas, with all of its parts, decor, and the purpose for each of its pieces seen in the depictions is explained in further detail in 'The Goat's Pen'.

The Spolas was made of leather and strengthened with bronze scales and plaques.

Decoration in the form of trim, appliqués and painting are evident on nearly all of

these armors.  However, not all Hoplites that are depicted in the period show all

had the same level of protection. The Greeks, like any other early civilization,

had a market based economy.   Young men just entering military service and men

whose livelihood couldn't support the luxury of very well made armor, eschewed

scales and plaques, and other adornment as they could not afford it. The Spolas

was likely a homemade affair, with the family all pitching to help gather the

materials and supplies necessary to construct it. It is important to realize that these

men were the National Guard of their day.  Each village or town had its Hoplites

who, when called upon, dropped their everyday professions and donned their Spolae

​ and took up arms to defend their city.

In Classical Greece, there does not appear to be any uniformity in their arms and

armor. Indeed, numerous examples in the period literature indicate that mistakes and

foe. As much as the modern mind seems to perceive the Lambda blazonry on the Spartan

shield as having always been their symbol, this is in fact not true in the Classical

Period. That kind of uniformity amongst the Spartans is first mentioned in around 430

BC. Nothing in the period prior to the Pelopennesian War indicates any uniformity was present.  Being that Spartans were so keenly aware of military advantages, it is logical to assume, absent any hard fact, that the Spartan military likely operated upon and encouraged some form of uniformity.  Most noticeable were their cloaks which was a documented uniformity even as early as 650 BC.   So it is likely the Spolae of the Spartans were broken down by colors or symbols by the various Agoge houses to which all Spartans belonged.*

*This supposition is merely opinion based in sound logic and study of this unique group of Hoplites and seems to be only applicable to them.

No uniformity on the armor of the other city-states’ Hoplites is depicted or noted in ancient literature. Hoplites were each an individual citizen first, who would have built his own Spolas or directed the construction by craftsmen to his individual tastes. The Greeks relished and thrived in individuality and so the range of Spolas decorations and colors depicted in ancient pottery and art seems to show no two were the same. Only the form and construction seem to be universal. As the wealthiest of the citizenry could afford such well made and protective armor they were often guaranteed an honorable position in the front three ranks of the phalanx. Here is where the greatest danger lurked and only a man capable of owning a good Spolas and helmet would have survived long in this position. So while they appear universal, the quality and range of their ancient representations show the esteem to which individual Hoplites were held solely by the Spolas he wore and the helmet he wore. 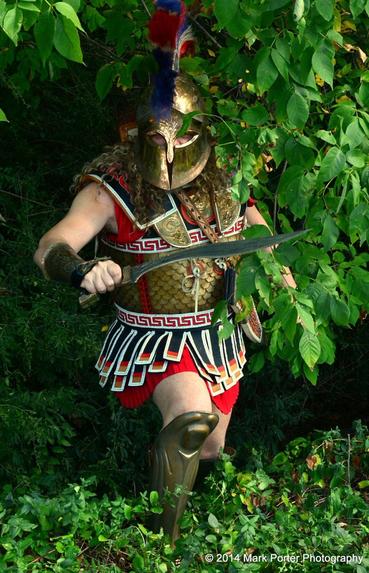