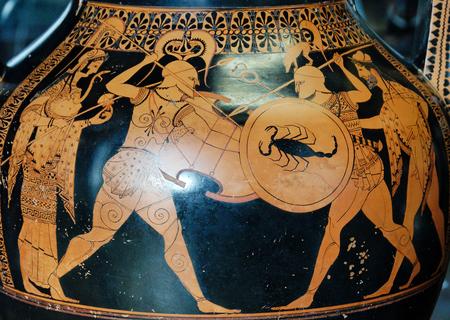 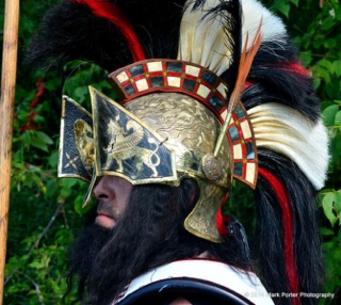 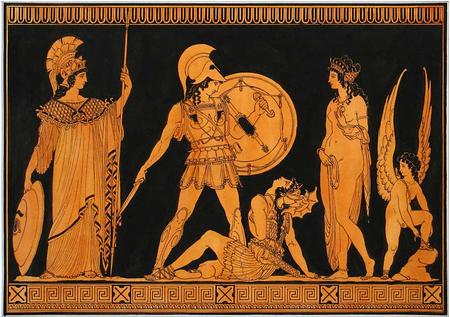 Briefly, the 3 Crest types used in order of their evolution:

The Archaic crest-
Also called a 'J' or 'J hooked' crest. These were in widespread use from about 800 BC to the beginning of the true Hoplite period, about 650-600 BC. The years quoted are quite general as it is difficult to assess such specific time to the development and use of a given object. New finds and artifacts constantly shift these dates around, so I have to be unusually broad in my dating here.

Common Corinthian Crest-
This is perhaps the most well-known and depicted crest. It has appeared in overlapping time with the earlier 'J' crest, and continued in use throughout the Persian and Pelopennesian War periods, only disappearing with the abandonment of Hoplite warfare.

Tranverse Crest-
Perhaps the most unusual and specific of the crests, it originally evolved as a distinctively Spartan crest to be worn only by the upper echelon of the army and gained some popularity throughout all of Greece along about 450-440 BC. Its re-creation and use today is quite overdone as it would have been worn only by 1 of 1500-2000 Spartans. The rank and file of the Spartan army would have used the Common Corinthian type. 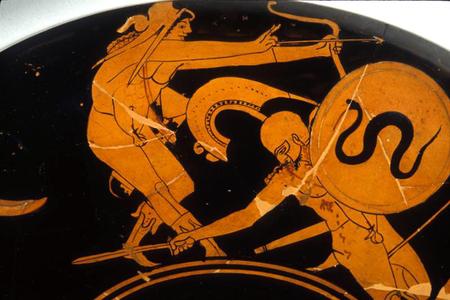 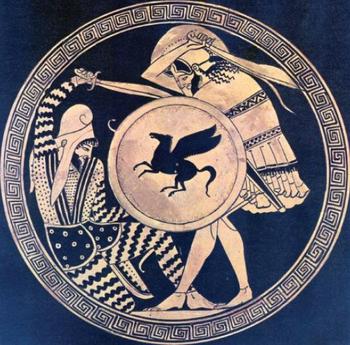 Right:  One Hoplite with a Lotus style helmet sporting a J-hooked crest, while the second Hoplite has an open faced helmet, possibly a Chalcidian style, also with a J-hook crest

​Below right:  A unique depiction of 3 crest styles, including a J-hooked crest, a rare double J-hook crest, and an animal carved crest

A beautiful display of a Hoplite, along with a goddess wearing a helmet with multiple crests 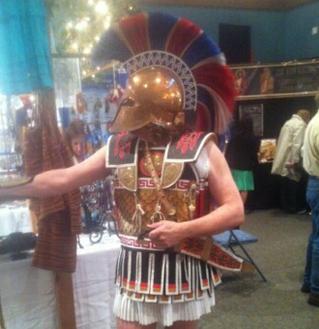 Crests probably came in a multitude of vibrant colors

​Perhaps the most striking and distinctively Greek feature of the Hoplite was his helmet crest! Tall and imposing, these crests served no practical or military purpose. They were used to add height to the Hoplite and intimidate his enemies. The effect they had on the battlefield is proven by the fact that nearly every single representation of the Hoplite that survives shows the crest. Pottery, sculpture, literature and the artifacts testify that their use was near universal in Greece.

Made completely from organic materials, none have managed to survive the ravages of time. Though some could argue the crest box itself could have been made of ceramic or bone, this is not likely. Wood would have been a lightweight, durable and easily shaped material to have chosen and there seems to be little argument on this point. The actual crest itself was made of horsehair; in natural colors, dyed, bi-colored or multicolored. As one finds with the Greeks, there seemed to be no universal standard applied in coloration or size of the crests.

Examination of the representations of the crests seems to indicate a near universal range in their size. They all seem to hover within the 7-10 inch range on average. Making the average height of the Hoplite just over 6ft. Tall…quite tall, in that age!

The horsehair was tied into uniform sized bundles and glued into holes bored into the crest box. Their length likely trimmed later as tastes required. Though the helmets that exist are relatively silent on the evidence of crests, some do show signs of them. A number of helmets have tiny nail or thong holes spaced along the top of the helmet, and just a few show a change in the patina of the bronze where a crest would have been. Thus indicating the helmet was buried with the crest still affixed to the helmet as it would have taken a very long time to have created this patinization pattern.

As to how they were affixed to the helmets......no one knows for sure. There were likely a number of different methods employed. While we know that certainly some were nailed on or had a thong threaded through the crest box and helmet, thus tying them together; there is one factor that is likely true with any method used...the use of pitch-tar as a failsafe method. Whether nails or thong were used, pitch was a universal 'super glue' of the period. Pitch is a pine tar concoction mixed with wax and ash that is waterproof and is so tacky and gummy that it was most commonly used in classical times to assemble ships. Adding a paste of pitch between the metal helmet and wooden crest box would stick the two different materials together surprisingly well. In fact, a variation of this method is still in use today to assemble silverware.

Having made pitch in the ancient Greek way and experimenting with it to gauge its properties, I can see why it was used. Unless high heat or extremely high shearing force is used against the join, the pitch is near permanent! The fact that many artifact helmets lack any sign of a crest is due mostly to the use of pitch without any other method to affix the crests. Over 2,000 years of burial would have erased any evidence of the pitch having been there at all.

Some people argue for more elaborate methods like pins, catches and slots, but these are without merit. The common helmet types of the classical period seem to lack such 'mechanized' hardware; in fact, they seem to display no obvious signs of crest attachment at all, other than the aforementioned holes. The argument for these more sophisticated methods are usually brought about by those arguing that the Greeks removed their crests frequently so as to keep the hair straight and standing up. However, this would invariably lead to broken catches and pins and crests coming loose, etc. The answer to resolve this question is very simple and very obvious. The Greeks treated the hair with a technique designed to prevent it from ever drooping. No representation from antiquity shows the crest in anything less than a full state of attention, so this seems to have been a very important aesthetic point for them. If the hair is treated to remain stiff and in its shape, there would be little need to ever remove the crest unless it was damaged and a bit of applied heat and the pitch would separate without damaging the helmet in the least. 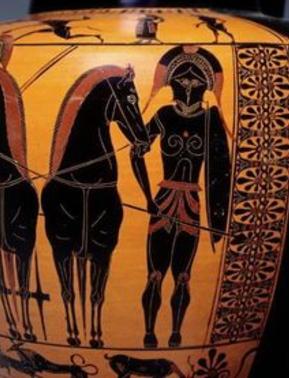 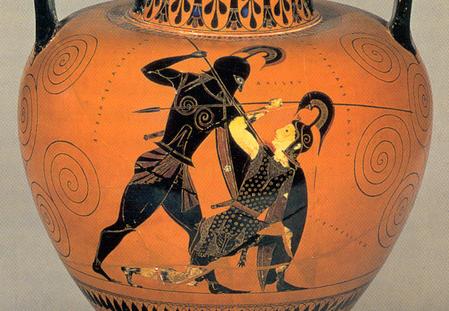